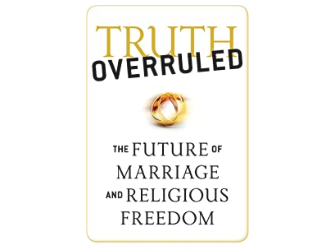 I forget now where I first heard of this book, but I’d guess it was a podcast. And in my typical fashion, I’m reading an author’s books out of order. One day I’ll read books as they were published. But as with When Harry Became Sally, Anderson has crafted a book that doesn’t mince words yet also comes across as compassionate and well-reasoned. I learned a lot while reading this book, most especially how to discuss the truth of marriage with the proper vocabulary and the right attitude.

Anderson breaks down the marriage debate systematically in his book, bringing us back to the roots: what is marriage, how has homosexuality been viewed in the past, what was the norm, and what is truth? Anderson also balances discussing where truth is based – on God and His Word – and how that, along with natural law, flows into public policy. Furthermore, he emphasizes how public policy shapes the culture, especially what the culture views as moral. This book was also written before the overturning of Roe, an example he uses along with the positive and constructive actions of pro-lifers to encourage those who wish to speak out and act on the truth of marriage. And he covers all his bases, discussing not only definitions and history but also many court cases, religious freedom, the difference from race, the victims of a redefinition, and where to go from here. It really is a comprehensive book on the subject.

This book shows how our culture got to the point that it did, what current advocates are saying, and where we should go with public policy. Additionally, he emphasizes what will happen if we do nothing and who will be hurt most, namely, children. Adults should be serving them, not excusing their needs. We’ve done this long enough with sexual promiscuity and divorce. Walking further down this path will only harm them more. Truth Overruled also made me realize that I have been out of the loop of the LGBT narrative more than I initially realized. I thought I was informed, especially on cases that have been chipping away at religious freedom, but I was wrong. While we’re not in the state some other countries are in as far as persecution, that doesn’t mean that we should do nothing. I also didn’t have a solid defense on why same-sex couples shouldn’t adopt, among other issues. But since reading this book and Them Before Us, I have a much better understanding of the gravity of the situation for kids.

Moreover, Anderson emphasizes the need for Christians and churches to stand up for truth. A truth-filled, religious life isn’t just about showing up on Sunday. “It’s about what we do Monday through Saturday” (p. 118). We need to be the loving, truthful voice for the culture, for those beguiled by the LGBT agenda, and especially for our children. We Christians are, in small ways and large, part of the problem with the pervasiveness of the sexual revolution. As Anderson says, most Americans, and least of all Christians, are interested in a culture war. But, “the culture war [is] interested in them. And it’s interested in the rest of us, too.” (p. 122) “The church needs to show the truth is better than a lie.” (p. 190) And most of all, families need to show what marriage looks like, what it is foundationally, and what that means not only for our children but for the culture as a whole. From there, Christians need to also be at the forefront of content creation so that there is a truthful message feeding the minds of everyone, especially our children. The first step to fixing the culture is living the truth about marriage without ignoring the culture-shaping institutions.

This book makes it very clear that the culture is at a turning point. But while the circumstances seem bleak, like with Roe, we have a voice and a duty to speak up. There is hope for restoration. This isn’t a time for despair, he says, but to take action. This well-researched book will hopefully help give many the courage to speak up and not back down from the culture war that has come to us. In the past, such heretical and immoral pushes from the culture resulted in a shaping up in the Christian sphere, which resulted in the betterment of all. While this book is a few years old, there is no better time than the present to read Truth Overruled and engage with the battle the culture has handed to us, starting at home.