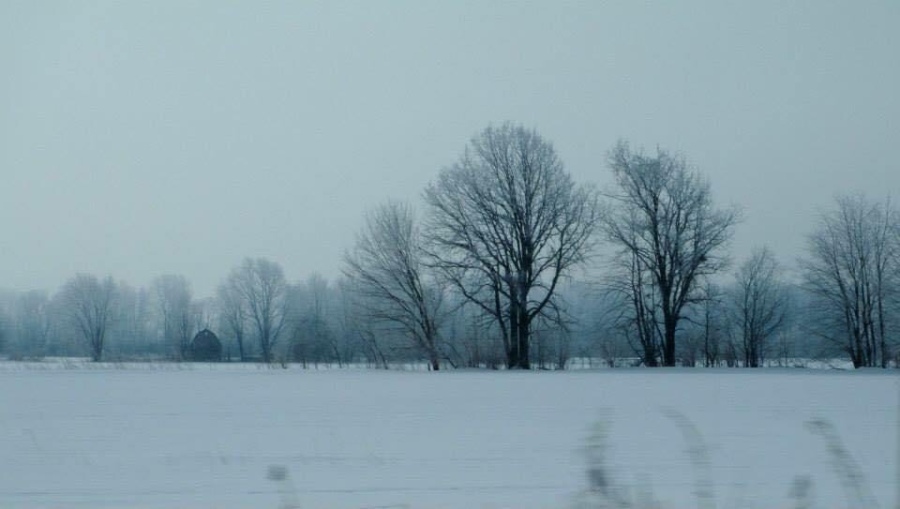 I leant upon a coppice gate
When Frost was spectre-grey,
And Winter’s dregs made desolate
The weakening eye of day.
The tangled bine-stems scored the sky
Like strings of broken lyres,
And all mankind that haunted nigh
Had sought their household fires.

The land’s sharp features seemed to be
The Century’s corpse outleant,
His crypt the cloudy canopy,
The wind his death-lament.
The ancient pulse of germ and birth
Was shrunken hard and dry,
And every spirit upon earth
Seemed fervourless as I.

At once a voice arose among
The bleak twigs overhead
In a full-hearted evensong
Of joy illimited;
An aged thrush, frail, gaunt, and small,
In blast-beruffled plume,
Had chosen thus to fling his soul
Upon the growing gloom.

So little cause for carolings
Of such ecstatic sound
Was written on terrestrial things
Afar or nigh around,
That I could think there trembled through
His happy good-night air
Some blessed Hope, whereof he knew
And I was unaware.

There are three things I love about this poem.

The first is the imagery. I can paint a picture in my head of the scene Hardy describes. I’ve seen it in the chilly winters of Michigan in the country, where the gray dust of ice, dirt, and salt shrouds every surface it can lay its hands on. I’ve seen those black, deadened trees scraping the sky, whistling with broken tunes as the winds whips across the open fields. Chimneys give rise to a hint of warmth and life at dusk. Each line of the first two stanzas evokes a sense of chilly silence, emptiness, and death. It is beautiful, but only in an artistic and haunting way. And every time I read this poem, a new element is added to my mental painting.

The second is the careful use of capitalization. We have four figures to look at: Frost, Winter, Century, and Hope. I see most of them in my mental painting. As Hardy leans upon the gate, gazing out onto the barren land, I can see Frost across the way with smoky breath, smiling eerily at the poet’s unease. I look again with Hardy in a different direction, only to watch as Winter fades into the horizon. Even what he took from Autumn is empty, and so he drunkenly makes his way to the wasteland. But Century is the picture. He is the question of the age, the existential doubt creeping into every mind, including Hardy’s, leaning past what his reason can allow. He is what makes the painting chilly instead of quietly beautiful. As the 19th century comes to a close, the New Year’s gray sky serves as a burial shroud for the solace that once was, the certainty of life and truth now dead in the minds of most. Christmas is a thing of the past. But then, there is this uncanny Hope.

The third thing I love about Hardy’s poem is that still small voice piercing the bleak midwinter. Here, amid natural death and uncertainty, there is a thrush. His sweet, clear, honest song rises above the gloom. Winter seems to have disappeared, and Frost is nowhere to be found once the full-hearted and joyful song of the thrush begins. Look at the phrasing Hardy uses. Even in this evening of doubt and gloom, the thrush, though he is aged and wind-worn, flings his soul across the barren world, lighting a little fire in our own souls with his. The thrush gives everything to his listeners for their joy and edification, gleaning from his own simple trust to spark his song.

And with that image, we come back to Hardy as he considers the song of the thrush. The world Hardy painted for us was so bleak that we, with him, are startled out of our earthly despairing into this ethereal Hope. The thrush tells us good night, yet he knows the morning is yet to come. He, unlike too many of that day and today, knows of a blessed Hope that redeemed this mortal world. And so, in the midst of dark and silence, of aging flesh and bone, he sings a song of Hope that pulls us to life and light.